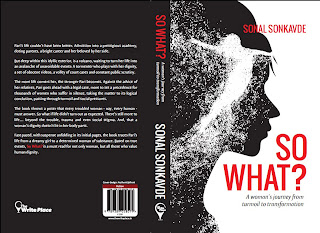 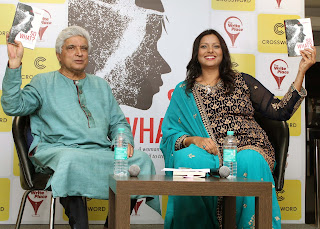 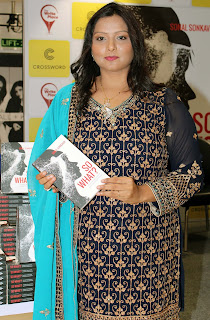 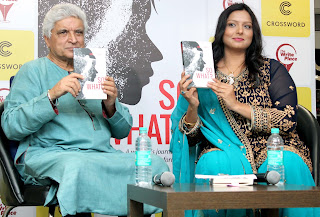 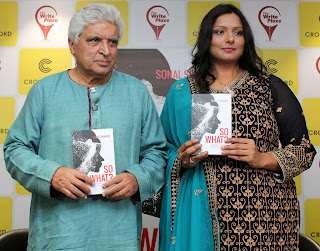 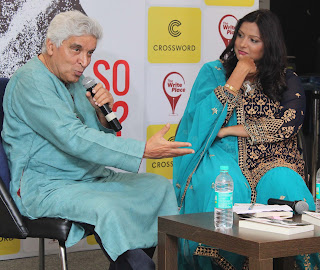 Renowned Poet, Lyricist, Screenwriter and Socio - Political Activist, Javed Akhtar came specially to launch Sonal Sonkavde, an astute IRS new book 'So What?' at Crossword, Juhu .Her book 'So What?' - A Women's journey from Turmoil to Transformation. This is her second book after “Comma”. Sonal Sonkavde is also a versatile singer and actress. She has also launched her short film and music videos.

So What? Blurb:
·    Pari’s life couldn’t have been better. Admission into a prestigious academy, doting parents, a bright career and her beloved by her side.
·  But deep within this idyllic exterior, is a volcano, waiting to turn her life into an avalanche of unavoidable events: A tormenter who plays with her dignity, a set of obscene videos, a volley of court cases and constant public scrutiny.
·   The more life challenges her, the stronger Pari becomes. Against the consent of her relatives, Pari goes ahead with a legal case, more to set a precedence for thousands of women who suffer in silence, taking the matter to its logical conclusion, passing through mental turmoil and social pressures.
·   The book poses a question that every troubled woman - nay, every human being - must answer. So what if life didn’t turn out as expected. There’s still more to life… beyond the trouble, trauma and even social stigma.
·   Fast paced, with suspense unfolding in its initial pages, the book traces Pari’s life from a dreamy girl to a determined and decisive woman of substance. Based on true events, So What? is a must read for not only women, but all those who value human dignity and character.
During the launch event , the authoress mentioned of rising number of suicides because of heartbreaks . She advocated the youth to read the book inspired by a true story and hopes that every reader will turn out to be an independent decision maker, lives for oneself, and does not let her or his dreams die because of societal pressures and stigmas.
She categorically stated that a woman’s dignity doesn't lie in her body parts, but it lies in her attitude and aura. She cited examples of Gautam Buddha visiting Amrapali; significance of Khajuraho and Kamasutra scriptures to make her point that it's not Indian culture which has linked dignity of women to her body parts. Indian culture was always liberal, and sex was not a taboo subject. But over the period, some elements did a planned social and cultural plunder. The patriarchal mindset aimed at  putting women within the confines of four walls. The status of women was reduced significantly, and they were subjected to all types of exploitation and subjugation. Ironically, this is not the legacy of Indian culture or tradition. In ancient Indian culture, women had an exalted status and they were revered and worshipped.
The authoress further emphasised that It’s an unfortunate irony today that rape victims don’t come out in public because it is presumed that she has lost her dignity and not the perpetrator. She suffers in silence and escalates her victimisation. She feels socially disempowered and disowned and fails to understand that the journey from a victim to survivor lies in the mind only. It's within and not without. My Pari , the protagonist has a distinct attitude. She not only has the courage to fight her battle for dignity but also the strength to face the society even when her sex tapes get leaked in public.
Authoress further questioned why the counterpart involved in crime of rape never has loss of dignity ?
There was an intense discussion on different social issues during the book launch. Pari’s journey from clinging to the troubled relationship to 'let go' of her husband who deserted her is the essence of the book. Ms. Sonal Sonkavde raised significant issues related to the upbringing of the girl child in India. Right from her childhood, she is brought up in a very protective way. She is taught lessons on household prudence but not individual independence. Their sole journey of life lies between father’s abode to husband’s home as if there is nothing more to achieve in this world. They don't know how to stay alone. They are never exposed to loneliness and hence they can't handle desertion. They are not able to handle their finances well as if financial wisdom is only the domain of men. They don't know how to enjoy their own company. They don't know how to travel alone , eat alone in a restaurant, enjoy a movie alone and hence they suffer miserably when left alone.
She highlighted these issues so that women must know the importance of themselves and can enjoy their life on their own terms. This is very important in the present scenario because of the significant increase in the number of cases of desertion as marriage is no longer considered a sacrosanct institution. She further said that though times are changing, and many women today are making their mark in the society but still much needs to be done. In urban areas, there is a stupendous paradigm shift in raising a girl child, but at the grass root level things are still the same.
She emphasised the need to make Indian women more independent in all areas of life; where they can take their own decisions independently and more holistically. If something untoward happens, they should be able to handle it by themselves so that they do not have to rely on others.
Editors Dr. Gazal Goyal , Rajesh Aiyer also were present during the book launch and they both elaborated on the philosophy the book lays down. Love lies in letting go; communication is the essence of every relationship; law of attraction; chose what you fight for; stop owning problems; draw a bigger line in life if you want people to forget smaller line; change in thought pattern leads to change in aura and energy levels were the key points emphasized by them. They said, "If you are put to extraordinary situations, you are lucky as you evolve more. Most painful times lead to ultimate growth. Many achievers have gone through a lot; from trouble to trophies; from tribulation to triumph and from turmoil to transformation".  They also spoke on healing , Forgiveness, self-victimisation and reformative justice..
Javed Akhtar launched IRS Sonal Sonkavde's new book So What at Crossword,Juhu .