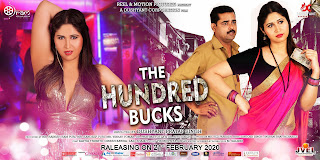 Probably in a first of sorts, the film rights of a book got sold even before the book hit the stands and that seems to be the story with The Hundred Bucks! Dushyant Pratap Singh produced and directed The Hundred Bucks is all set for a double whammy . Not only is the movie releasing on the 21st of February, but this gritty cinema will also see a book releasing by the same name just a week short of the film release!

“My daughter, Vishnupriya Singh, who also happens to be a terrific writer and I was surprised that at such a young age she could write on a subject that’s heart-wrenching, realistic and terrifying all at once. When I first heard the story I was sure that this deserves to be made into a film and as they say, the rest is history,” says a proud father and also the producer of the film Dushyant Pratap Singh.
The Hundred Bucks is the story of 1 night in Mumbai revolving around Mohini, a prostitute and her autodriver. How they struggle the whole night finding customers for money, deal with cops, politicians etc only to end up with a meagre 100 bucks at the end of it all is what this film is about. It’s a gritty tale of the lives and miseries of women who choose such means to make money but even at that their struggle is no end.
The film has done the rounds of many film festivals and have received thunderous response. Especially for the powerful portrayal of Mohini essayed by model turned actress Kavita Tripathi. Releasing on 21st, the film has been co-produced by Sandeep Puri , Vibhav Tomar , Pratima Totla and  Ritu Singh.