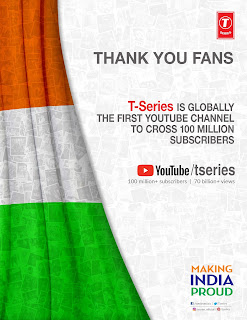 Mumbai, May 29:  Close on the heels of becoming the world’s largest YouTube channel, India’s biggest music label T-Series has achieved another YouTube milestone  – it has crossed an astonishing 100 million subscribers. A dominant player in the Indian entertainment industry, T-Series catapulted itself to the top slot with leading films, songs as well as singles (non-film music). Founded in January 2011, the T-Series YouTube Channel has 29 sub-channels and has the most viewed uploads.
Chairman and managing director Bhushan Kumar, who has spearheaded the music and film company successfully, recently took brand T-Series a notch higher. Taking over the reins of T-Series at the age of 19, Kumar with his foresight and sharp business acumen has propelled brand T-Series to an enviable position including being the world's biggest YouTube Channel, marking 100 million subscribers. Kumar has always credited his company’s success to its superior content and the loyalty, hard work and tenacity of his TEAMS.
A triumphant Bhushan Kumar expressed, “A constant surge of new music as well as early adaptation and first mover advantage went in our favour.  We pushed our content across offline media and social media platforms without any doubt about what we could achieve, it helped drive traffic to our channel. I am thankful to our loyal consumers who repeatedly showed immense faith in our content. Also thankful to everyone at T-Series who helped take T-Series to new heights.”
Neeraj Kalyan, President, T-Series, who also heads the digital division of the company, shares his excitement saying, “This is indeed a proud moment, our teams have put in immense hard work to keep the T-Series flag flying high.  Music for us has never been about excel sheets, it’s not a number on a paper. It’s a passion driven by belief in our content. This milestone will further inspires us to conquer new frontiers by offering world class content served through seamless distribution pipes across platforms and to create new benchmarks for ourselves.”
An elated Vinod Bhanushali, President – Marketing, Media and Publishing (TV) and Music Acquisitions, T-Series adds, “This achievement rightly proves that CONTENT IS KING. It was Gulshanji’s vision to promote new talent, create content in the form of music and films that consumers will love. Content creation that started in 1984, became available to everyone with easy navigation with just a click on YouTube. To ensure we feed the audiences with fresh content every day, we are making music via films that we are producing in-house, acquiring music and bringing back the era of music videos/singles. We thank the entire Indian film industry and our teams for helping us and Indians world over for showering us with so much love.”
Besides India, the T-Series’ audience base spans the UK, USA, Europe, UAE, Pakistan, Bangladesh, ASEAN, Australia, New Zealand and many other countries.
From making music to licensing and publishing content across several media platforms, T-Series is the destination to a vast variety of content. One conglomerate that looks after music production, music acquisitions, movie production to marketing and distribution, Bhushan Kumar has put India on the global map by taking the label to greater heights with its resounding digital success.
With an exceptional run in global markets with Aashiqui 2, Hindi Medium, Tumhari Sulu, Sonu Ke Titu Ki Sweety, Raid, amongst others, T-Series has close to 18 films lined up in 2019 and several which are under production for 2020.
Bharat, De De Pyaar De, Saaho, Street Dancer, Kabir Singh, Tanhaji: The Unsung Warrior,  Batla House, Marjaavaan, amongst others, T-Series has collaborated with some of the biggest names in the industry to deliver new, interesting and varied content. Achieving the milestone of 100 million subscribers on YouTube is just the beginning of a new journey.
Bhushan Kumar’s T-Series makes India proud World’s biggest YouTube Channel charts a milestone with 100 million subscribers