The Accidental Prime Minister highlights the life inside the PMO 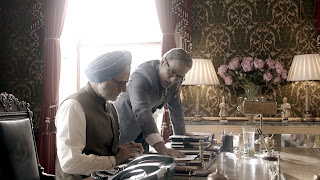 Mumbai, December 28th, 2018: The trailer of the much-awaited political drama, The Accidental Prime Minister released yesterday and has received remarkable response across social platforms. Based on Sanjaya Baru’s 2014 best-selling memoir by the same name, the trailer gives us a glimpse of what happened behind the curtains when Dr. Manmohan Singh was the prime minister of India.
An ex-journalist, political commentator and policy analyst, Sanjaya Baru worked as media strategist to the former Prime Minister Dr. Manmohan Singh from May 2004 onwards and the role is essayed by Akshaye Khanna. On the other hand, Anupam Kher's resemblance to Dr. Manmohan Singh is brilliant and has become the talking point.
The film gives us a glimpse of the inner view of the life inside the PMO and the interaction between the office and the ruling party. The director of the film Vijay Gutte says, “It’s the first full-scale political film on a real politician and the individuals they interact with. We are attempting to bring to the big screen the intricacies of party parties and its mysterious inner workings, given that in India, the common man has no access to inside stories of the PMO. Watching Anupam and Akshaye play real-life characters will be a treat, as well as educative experience for the moviegoers.’’
The director also mentions that he respects Dr. Manmohan Singh and wants people to know about the good work he has done during his term. Vijay states,“He was misrepresented.’’ However, he agrees that the film will stir up some interesting debates.
The movies’ presenter Jayantilal Gada says, “The characters are powerful and when strong performances meet strong content, the audience is bound to be treated to good cinema. I’m very positive about the film.’’
Rudra Productions (UK) Bohra Bros, in association with Dr. Jayantilal Gada (Pen), present The Accidental Prime Minister, The film, produced by Sunil Bohra, Dhavan Jayantilal Gada and Bloom Arts Pvt. Ltd. releases on January 11, 2019
The Accidental Prime Minister highlights the life inside the PMO