Aadhaar Card Not Mandatory To Link With Bank Account Or Phone 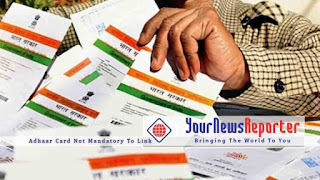 Today the Supreme Court Of India extended the March 31st deadline for the mandatory linking of the Aadhaar Card to the bank account, passport, phone, drivers license etc. As of now, it is not mandatory to link your Aadhaar to any services you avail.

The top court said that it will decide if the linking of Aadhaar violates the right to privacy of the citizens. The Supreme Court will deliver the final verdict after looking at all the concerns raised. The bench headed by the CJI, Dipak Mishra said that the government can not force its citizens to link their Aadhaar to the services like bank accounts, phones etc.

“The government cannot insist for mandatory Aadhaar even for issuance of Tatkal passport,” the Supreme Court said.

The court wants to decide if the Aadhaar Act is illegal according to the constitution of India.
Also Read: Exam Writer: Creating disabled kids
Linking of the Aadhaar Card may cause serious security breaches, the petitioners said. Since the government is insisting the citizens to link everything with Aadhaar, it could have significant implications in case of a data breach. The data will contain each and everything about a person, including their accounts, where they spend, what they do, who their friends and relatives are, etc.
The government had been collecting this data without any authorisation since 2009. In 2016, the center however, came out with a law that would nullify any objection if raised against this practice.
Thanks.. http://yournewsreporter.com/adhaar-card-not-mandatory-to-link-with-bank-account-or-phone/
Aadhaar Card Not Mandatory To Link With Bank Account Or Phone