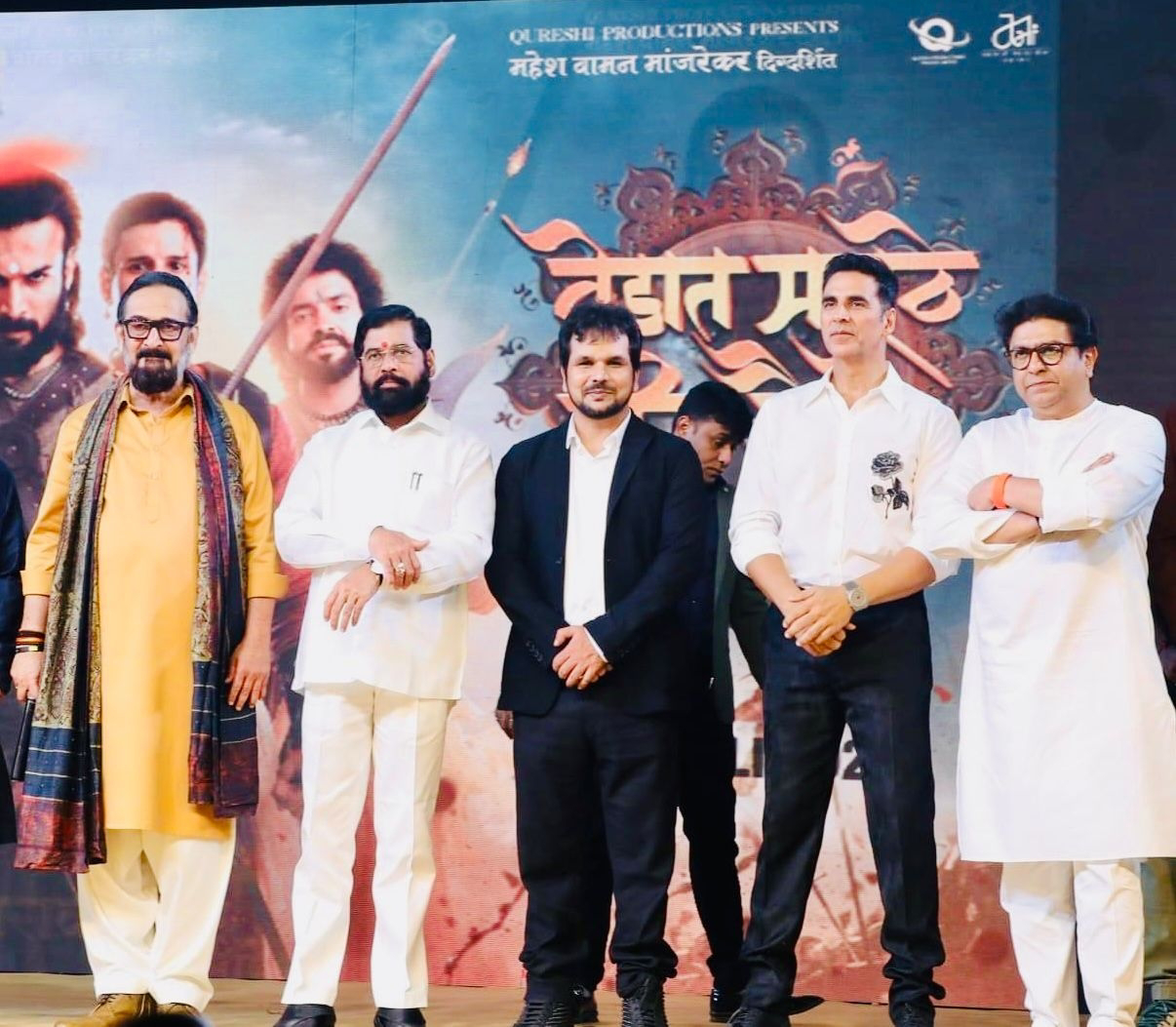 Mahesh Manjrekar's extensive research has gone into the making of 'Vedat Marathe Veer Daudle Saat', says producer Vaseem Qureshi
"The upcoming historical film 'Vedat Marathe Veer Daudle Saat' will be written in golden letters in pages of Bollywood history as a landmark film that is extensively researched, meticulously scripted and directed by Mahesh V Manjrekar," says Vaseem Qureshi who is the producer of this magnum opus that portrays a slice of history during the regime of emperor Chhatrapati Shivaji Maharaj.
Vaseem Qureshi of Qureshi Productions Pvt Ltd make a rocking entry into production of the historical period film 'Vedat Marathe Veer Daudle Saat' that will feature Bollywood superstar Akshay Kumar playing the character of Chhatrapati Shivaji Maharaj.
Hon'ble Chief Minister of Maharashtra Shri Eknath Shinde, MNS leader Raj Thackrey and Bollywood's 'Bhaijaan' superstar Salman Khan lauded the greated pre-production work done by Mahesh V Manjrekar, the director of the film.
"This film is my dream project that is based on the story of the seven valiant warriors who had the sole aim of bringing Shivaji Maharaj's dream of Swarajya to reality, writing one of the most glorious pages of history," Manjrekar announced at the collaboration between him and Vaseem Qureshi.
The ecstatic superstar Akshay Kumar who is essaying the role of this valiant emperor feels, "For me it is a dream role to portray Chhatrapati Shivaji Maharaj and it comes with a responsibility. I was taken aback when Raj sir asked me to portray this role. Also, I will be working with director Mahesh Manjrekar for the first time and it is going to be an experience."
Vaseem Qureshi is one of the most powerful film producers in the Bollywood industry. Qureshi's last film Dehati Disco was a nationwide super-hit. Another film 'Suswagatam Khushamdeed' that stars Pulkit Samrat and Isabelle Kaif is ready for release. "By far, Vedat Marathe Veer Daudle Saat is the biggest venture for us and I am sure that the magic of Akshay Kumar and Mahesh Manjrekar will set a new milestone in the Indian film industry," says Vaseem Qureshi who also owns Aatma Music that has established its presence as one of the popular music channels online.
"We are proud to produce director Mahesh V. Manjrekar's dream project that he has been working on it for the past 7 years and it's subject will interest the nation and the world about the greatness of Chhatrapati Shivaji Maharaj. It is by far the biggest and grandest Bollywood film to be made and with its release India-wide, and it will be a multi-lingual film that will simultaneously be released around Diwali 2023 in Hindi, Tamil and Telugu apart from Marathi ," Vaseem Qureshi ended adding that it will also feature the ensemble cast of Jay Dudhane, Utkarsha Shinde, Vishal Nikam, Virat Madke, Hardik Joshi, Satya, Akshay, Nawab Khan and Praveen Tarde.
'Vedat Marathe Veer Daudle Saat', says producer Vaseem Qureshi