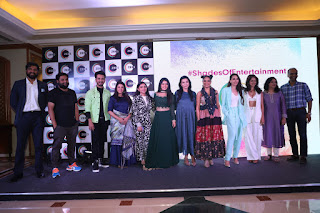 Present at the calendar launch were celebrities like Karisma Kapoor, Sandhya Mridul, Shilpa Shukla, Sandeep Unnithan, Vidya Malvade, Shabana Shajahan, Megha Shetty, Anita Date, Abhijit Khankekar, Komal Nahta, Gangaraju Gunnam along with other personalities from the industry.
The evening started with an undisputed cheer and had a celebratory vibe. The host spoke about the content pieces which are part of the March line-up and engaged with the respective teams who were present.
There was 2X excitement seen in the room as the guests present for the evening got an exclusive sneak peek into ZEE5’s new AVOD campaign, ‘Main Mera Dekh Lungi’, which is an ode to modern women. It’s an expression of self-accomplishment and choices made by the women who sit at the core of every family. Through this campaign, ZEE5 aims to create a radical shift in how these women consume content across the country and further, give power to them to watch what they like, at their own perusal. The new TVC will be launching in Hindi, Marathi, Tamil and Kannada markets and to represent these markets the launch event witnessed the presence of some most popular faces from the respective industries namely Anita Date and Abhijit Khankekar from Marathi TV Show Mazhya Navryachi Bayko, Shabana Shahjahan from Tamil TV Show Sembaruthi and Megha Shetty from Kannada TV show Jothe Jotheyali.
Talking about the March calendar line-up, Aparna Acharekar, Programming Head, ZEE5 India said, “We recently completed our 2nd anniversary and will continue offering real, relatable and content that resonates with every consumer. Our March calendar has a fantastic line-up of upcoming TV shows, Originals (series and films) across languages, chat shows and much more. We do hope viewers continue watching and we continue our promise of entertaining them.”
On the premium front, this month, viewers will witness the release of a high-octane action thriller film based on one of the most controversial jailbreaks in the history of India. Starring Amit Sadh and Rahul Dev in pivotal roles Operation Parindey releases on 7th March 2020. To celebrate women’s day, ZEE5 and ALTBalaji will be launching Mentalhood starring Karisma Kapoor, Shilpa Shukla, Tillotama Shome, Dino Morea, Shruti Seth and Sandhya Mridul in pivotal roles. Sanjay Suri plays Karisma Kapoor’s on-screen husband in the web series. 13th March will see the launch of Kannamoochi, a Tamil thriller series starring Poorna, Vivek Prasanna, Amzath Khan, and Aaradhya. The same will be followed up with the release of the most awaited show based on Sandeep Unnithan’s ‘Black Tornado: The Three Sieges of Mumbai 26/11” titled State of Siege: 26/11 starring Arjan Bajwa, Arjun Bijlani, Vivek Dahiya and others. ZEE5’s Ugadi surprise Amrutham 2.0 (Telugu) premieres on 25th March. 6 Years after it began telecast as a weekly sitcom, Amrutham ended its run on Television. The popular show will now be back after 13 years on ZEE5 and will be produced by Ganga Raju Gunnam. March 27th will see the premiere of Kaali 2 (bilingual – Hindi and Bengali), the story of a woman’s discovery of her stronger self, starring Paoli Dam, Chandan Roy Sanyal, Vidya Malvade.
In addition to this, ZEE5 will also be releasing the below fiction, non-fiction shows and digital movie premieres across languages:
ZEE5 UNVEILS THE MOST ENTERTAINING MARCH LINE-UP; GIVES EXCLUSIVE SNEAK PEEK OF ITS AVOD CAMPAIGN