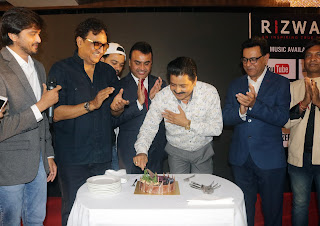 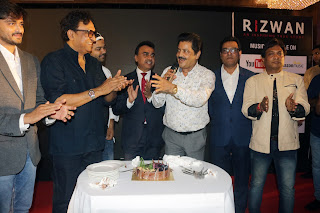 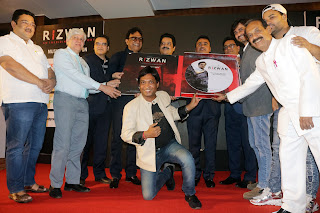 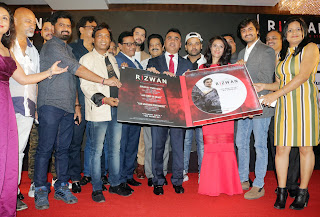 Mumbai : The much awaited movie “Rizwan”, produced and directed by Haresh Vyas and inspired by a true story took its first step towards release. Trailer and music launch concluded successfully amongst the cast and crew of the film with some other eminent guests.
The movie which is already generating interest amongst its viewers because of its story line which is inspired by a true story is expected to be a milestone in the genre of meaningful cinema. The movie is Directed by Haresh Vyas and written by Dr Sharad Thakar. Features Vikram Mehta, Keyuri Shah, Bhargav Thaker, Jalpa Bhatt, Gaurav Chansori,  Digisha Gajjar, Sonu Mishra, Sagar Masrani, Hitesh Raval, Chirag Katrecha.
The event also marked  the music launch of the movie and audience can now experience the magical and musical experience. The movie has songs like “Sukar hai Vyadhi Nathi” which has music by Sohail Sen Lyrics by Anil Chavda, Bhavesh Bhatt, and Altamash Faridi has rendered his soulful voice to the song.
Another musical treat in “Rizwan” is the song “Aao sabko Shikhlaye” which has music: by  Sohail Sen, Lyrics are by Anil Chavda  and Bhavesh Bhatt. Not to forget the song is sung by Mr. Udit Narayan Ji & is very special to all.
Not only Hindi but Rizwan also boasts of a Portugese song “Kanimmambo”, where Mr. Haresh Vyas him self took the job of writing lyrics in his own hand along with Ms. Nilza. , the music is by Francisco Fortuna and the Singer for the same is Marione.
Mr. Haresh Vyas who is donning many feathers in his hat in the movie when asked about his experience said “It always gives immense pride and happiness when you can see your hard work on the silver screen ‘Rizwan’ was a dream project and the only thing I had in mind was to justify it to the fullest. Whenever a movie’s subject line is based on a real story, the task gets tougher and it’s a challenge to recreate someone’s journey in a manner that keeps even the facts intact and at the same time entertain the audience. The cast and crew totally supported the view & the subject and together we all have created something that we wish will be liked by audience as much as it is liked and loved by us.”
Mr. Rizwan Adatia a successful entrepreneur and a diligent philanthropist  has made India and Indians proud is the real life inspiration behind the movie, he was also present at the event and said, “It gives me immense pride that my journey could inspire someone and the audience can see the same on the silver screen. I am a small town boy with big dreams. But the journey to achieve those dreams was not easy the path was full of various obstacles. But I knew one fact for sure that giving up was neer an option and thus my journey continued despite of all obstacles and today I’m happy to see my journey in the form of cinema.”
Vikram Mehta who is portraying the character of Mr. Adatia in the movie, exclaimed happily, “It gives me immense pride that I was chosen to play a living legend like Mr. Rizwan Adatia on screen. Mr. Haresh Vyas had the parameters required to play the character in his mind and clearing the audition was not an easy task. The role needed lots of research and I even met Mr. Adatia to understand more about him. Now its in the audience’s hand to judge how much my hard work succeeded”
Haresh Vyas’s dream project “Rizwan” took it’s first step towards release. Trailer & Music Launch concluded successfully amongst stars, glitz and glamour