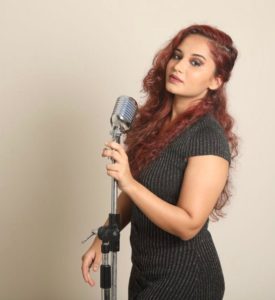 In Bolywood, destiny plays a very vital role in shaping one;s career because one enters the place to do something but ends up doing something else . In the case of Rukhsar, destiny made her an actor first but she realized that her passion is singing and hence decided to embark on a career as a playback singer .
Rukhsar had started her career as an actor with Yashraj Films’ Mardani in which Ranui Mukerjee was her co-actor and Pradeep Sarkar her director. Rukhsar decided to take up singing as a career when she recorded her first song in a studio.
Rukhsar has trained in music under the tutelage of Rampur Sahasvan. and her plus point is that she can sing in as many as five languages- Hindi, Marathi, Gujarati, Punjabi and English. Rukhsar who has her own You Tube channel has sing for as many as ten cover version besides crooning an original song which had fetched her 2 million viewers.
Rukhsar is excited about coming with an album with Fimi Productions. An ardent fan fo Shakeera in Hollywood, Rukhsar says that her favorite singers in Bollywood are Sunidhi Chauhan and Shreya Ghosal. She says that many have praise and said that her voice too has the unique timber and quality that Sunidhin Chauhan possesses. Rukhsar has done modeling too besides shooting for a catalog, besides performing on the stage but says that the satisfaction that she derives out of singing is something that no other passion of hers has given her till date.