Home Unlabelled Manish Uppal: I started theatre because I wanted to get into films!

Manish Uppal: I started theatre because I wanted to get into films! 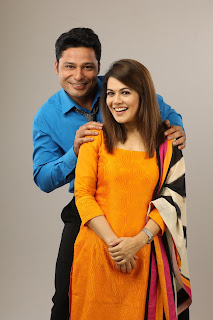 For actor Manish Uppar, the stage was just a medium to get in front of the camera. However, two plays down the line, he loves it. “I had done a play before 3 years ago as a lead and now I am part of another play Ananya. Theatre has not been so close to my heart as I started theatre because I wanted to get in films. But Ananya is really close to my heart and ahs made me realise how much I enjoy theatre. I feel lucky that I got the opportunity to do this play. I play the role of Dheeraj, Ananya's elder brother. He is frustrated most of the times because he feels that he is less loved by his parents compared to his siblings. My role is quite challenging because there are so many variations in it,” he says.

From Ye Jawani Hai Deewani to Ananya, Manish has done many interesting projects. Talking about the same, he says, “I had started acting in films with Kya Super Kool Hai Hum, that was my debut. After that I did Yeh Jawani Hai Deewani, then I played the lead in Life Mein Twist Hai. Last year, my Gujarati film Ani Maane released which has been a cult film and has been appreciated a lot by the critics. I was the main villain in the film. Presently, I am part of a web series called Hostages with Ronit Roy and Tisca Chopra, in which I am playing a cop.”

The actor loves working with his Ananya co-actor Shweta Gulati. “Shweta is a very jolly and bubbly girl. I am enjoying working with her so much. In fact, the whole team is so good that I feel like I have got another family. Everyone is down to earth, we all work from heart. So, I am very happy,” she says.

He adds that actor Ahwaan Kumar is also great to work with. “Ahwaan's character is really good. He has a very calm nature in real life. Prithvi sir, who is playing my father, is also amazing,” he says.
Manish Uppal: I started theatre because I wanted to get into films!