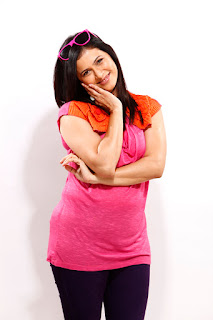 Actor Purva Parag, who is seen in Dipti Kalwani's  Ek Bhram - Sarvagun Sampanna, talks about her character, the show and the response that she has been getting.
What are the prominent shows you have done ?
I did a film called Gafla, then I did a film based on Sonia Gandhi. Talking about TV shows, I have done many on Sahara and BBC channel. I took a break in between and after that long break, I did a film called Koyelaanchal with Sunil Shetty as the main lead. I have also done Hasee Toh Phasee. Then I had did cameos in Madaari and Barfi. In Son of Sardaar, I played Sonakshi's mother.  Then, I came back on TV with Humsafar, Sarojini, etc.
What do you feel about the unique title of the show?
I am getting such a good response, people are asking me what the show is about. Even when I heard the title, I was curious. The title is very interesting and I love it. In fact, I love the characters more than the title. When they narrated the story to me, I was highly impressed. The concept is so amazing, I love my character and Shrenu's character. We have many scenes together, so we have done quite a few workshops together.
How did you get Ek Bhram - Sarvagun Sampanna?
I was out of town and I got a call from the team. I was not in a good mental state that I would be able to work but Dipti ji called me personally after a month and said that you should come and you should try it. She called me and she was so sweet to me while talking, so I felt that I had to do this. I cannot say no to such a sweet person. I had met her when I was doing Humsafar, she was a lovely person back then as well. So that’s how we knew each other. So when this happened, I felt like this is made for me…this character, this role was made for me. They all were so loving that if in case even if I would have not got selected, I would have been happy for having such a lovely experience. So that’s how I got the show.
What are your character details in the show? Are you playing negative or positive or grey? What is your look in the show?
I am playing Zain's mom in the show. I am the Saasu Maa of the Sarvagun Sampanna Bahu of our show, which is Shrenu. She does all her experiments on me. In real life, if you see if a bahu is Sarvagun Sampanna, the saas is happy. But what happens in the show is the complete opposite. My character has a lot of shades and you are in for a lot of surprises!
How much do you relate to your character?
I don't relate to my character at all. In real life, I am a very strong person. In this show, I am playing a typical mother, who is a homemaker, who is somewhat weak and is scared of her husband.  Being a mother, I can relate to her because even I am a mother of a son. But that’s the only factor I relate to. Otherwise, she belongs to a typical Marwari family and I belong to a family which is very open minded, so the laws and rules, the mentality…everything is different. But I believe that you need to love your character then only you can play it convincingly. So whenever I perform any character, I never question it. I just accept it and that’s the reason I am able to do it so well.
Thriller shows work big time with audiences what do you have to say on that?
It’s always nice to have something different in the show because even till today when a family show has been hit, it’s because it has a little bit of thrill in it. So, I feel lucky that Ek Bhram Sarvagun Sampanna is a very grand show and it has that thriller element in it continuously with a very positive atmosphere. So yes, I do believe in the fact that whenever there is thriller or suspense in a particular story, it always attracts the audience.
How is it working with Shrenu Parikh and Zain Imam?
Zain is a very cute person. He is someone who always has this smile on his face. So, it feels really great when he is around. Other than that, he is a very loving, caring and a down to earth person. Shrenu, on the other hand, is a very spontaneous girl. She is very creative, I have most of my scenes with her so I bond really well with her. We discuss a lot of things. Even if you suggest her something, she accepts it, so I really love that thing about her. She is beautiful, down to earth and she is doing really great in the show. If the leads of your show are like this then your show can go beyond limits.
How is it working with Dipti Kalwani who is the producer of the show?
Love and authority are two good qualities which Dipti has. She is very polite as a person and it’s a very beautiful thing. She takes care of everything and every one, our set is a reflection of her. The atmosphere of the set is like Dipti, everyone is very hardworking, polite and understanding. She talks with a lot of affection and love which makes us really feel good. So, I love her a lot as a person.
Why Purva Parag loves being part of Kalwani's Ek Bhram - Sarvagun Sampanna