Gaurav Gera, the master of disguises! 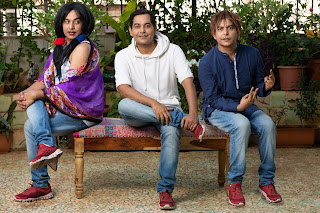 Long before social media stars like Bhuvan Bam and Kusha Kapila broke the internet with their ‘multiple avatar’ videos, one man had already been there and done that. Gaurav Gera, the master of disguises was one of the first few comedian-artistes who had dabbled in making short funny videos playing dress-up. For those who swear by social media would have watched his many Chutki, Shopkeeper, Aadu and Billi Maasi videos that have Gaurav doing hilarious take offs, wearing hideous wigs and funny snapchat filters. The actor who’s done television, films and theatre says he enjoys doing these videos on social media “because the feedback is instant. I love the medium of the internet. I love to make these videos because I feel creatively satisfied.” Gaurav not only acts in these videos but also writes and shoots them. A one-man army, the actor who prefers to be a homebody, says all he wants is not stardom or fans clicking selfies with him but to only accept him as their own. “Unko lagna chahiye, ye apna hi hai!”
Gaurav Gera, the master of disguises!