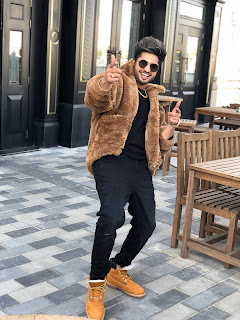 April 12, Mumbai: Post the humongous success of his last peppy number, Nikle Currant which crossed over 450 million views, Jassie Gill is set to surprise music buffs, especially his fans with yet another chartbuster, Surma Kaala!
Featuring him and Rhea Chakraborty, Bhushan Kumar’s T-Series produced Surma Kaala is a romantic song written by Jass Manak and composed by Snappy. While the love track was shot in the exotic locations of Dubai, the audience will certainly like the chemistry between Jassie and Rhea in this video directed by Arvindr Khaira..
After its blockbuster successes, Nikkle Currant that crossed over 450 million views and was ranked 5th amongst the top 100 videos on YouTube’s global chart and bagged the 15th position on the Billboard, Jassie is quite excited with his latest offering that released today on YouTube.
Jassie recently took to his social media handle to share the poster of Surma Kaala that created huge anticipation among his fans.
The actor-singer informs, “While Nikle Currant was a fast peppy dance number, Surma Kaala is comparatively a soothing love track appealing to all the romantics. It was a refreshing change to switch the genre of the song. The track has come out well and I hope people like it.”
Reminscing about her part in Surma Kaala, actor Rhea notes, “The memory that will stay with me is that it was pretty cold in Dubai and I was wearing really short clothes. In my last film I was chasing a guy. Even in this song I am chasing the guy and in my next film too. That apart the song and its music is beautiful and I had fun shooting it with Jassie.”
Producer Bhushan Kumar adds, “Going by the success of Jassie’s earlier single Nikle Currant, I am confident that Surma Kaala will also do exceedingly well. After watching Surma Kaala I can vouch that Jassie’s energy in his videos is mind-blowing and it always complements his strong singing skills perfectly.
Jassie Gill & Rhea Chakraborty groove to Bhushan Kumar’s ‘Surma Kaala’!