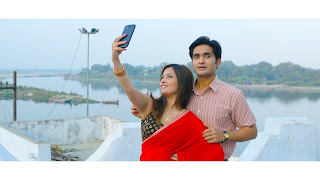 Bollywood Blue blood, Riya Sen is all set to play the female lead in the next web series from TWO NICE MEN Mediaworks.  Set in the city of Mathura; Directed by Nisheeth Neerav Neelkanth, the series takes you into a fantastical journey of a small town man with no ambitions, no sense of romance and very regular life. Anant Vidhaat of SULTAN and TIGER ZINDA HAI fame brings life into this character.
Riya Sen is all set to change the status quo when she makes an entry into his life under weird circumstances. It’s a fantasy that would excite any man on earth and alluring Riya is just so perfect for the part.
“RIMJHIM is a beautifully etched character and I have worked hard to add nuances to this half bong half UP girl. The natural set up of Mathura and the energy of my co-actors and the passion of my director have also brought the best in me. I had a fun experience working with Two Nice Men; Nisheeth & Harjeet and look forward to working again with them on the next season soon.” says Riya Sen.
“At the heart of this story is a human craving for love and romance and the struggle to hold on to it. Rimjhim and Mohan’s love story is almost magical and a lot of fun because of the fantastical challenge it faces. I hope the audience will love this avatar of Riya as she effortlessly brings Rimjhim to life.” says the director Nisheeth Neerav Neelkanth.
“ Every bit of this show from cast to location was selected with the clear objective of giving this series the scale of a film; hence the choice of Riya and Anant. Shooting the entire series in Mathura also gave it a unique small town and yet rich look. We are thankful to Mr. Madan Paliwal sir of Miraj Group for believing in us and trusting us with this huge production.” says Harjeet Chhabra; one of the Two Nice Men.
Riya plays a small town half bong, half UP girl in this romantic comedy meant for everyone in the family.
Anant makes his web debut with this after having worked in multiple hits with YASH RAJ FILMS.
About Two Nice Men Mediaworks Pvt Ltd
Formed by Harjeet Chhabra and Nisheeth Neerav Neelkanth; Two Nice Men Mediaworks has been active in the digital content space. Having recently created “Cutting Pyaar” ; a Series of short love stories for Zoom, which was followed by  “Andhadhoond Kanoon”; a mad courtroom comedy for Miraj Miracle. Both of them have had more than 25 Mn views online put together.
The next big series from the house of Two Nice Men is “PATI PATNI our WOH”. The first season of this series was recently shot in Mathura and is currently in the last stages of post-production. The series will have 10 episodes of an average 25 minutes each.
Two Nice Men is simultaneously working on an exciting Mother Daughter story for the Digital audience. TNM is also giving finishing touches to a love story script for a Full-length Feature film set amidst the aspirations and lifestyle of middle class Indian. Casting for the same would begin by May ’19 as well.
Before setting up Two Nice Men, Harjeet Chhabra spent more than 15 years in leadership roles at Times of India, BBC, Adlabs, and Sony Entertainment Network.
Nisheeth Neerav Neelkanth has spent more than a decade sharpening his creative skills at Leo, Star Network and Sony Entertainment
RIYA SEN & ANANT VIDHAAT WRAP THE SHOOT FOR THE NEXT WEB SERIES BY TWO NICE MEN; “PATI PATNI AUR WOH”