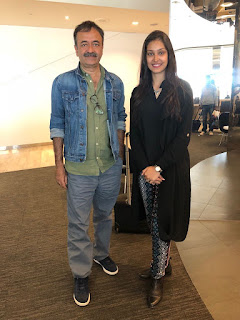 In a brief  rendezvous with the Bollywood genius Rajkumar Hirani, actress Navneet Kaur Dhillon former Miss India expressed her desire to work with the Sanju director.
"Working with Rajkumar Hirani will be like going to a gurukul" says Navneet Kaur Dhillon whose tryst with cinema began with her films like Loveshhuda,  Ambarsariya opposite Diljit Dosanjh, Nee Tu Jatt Di Pasand opposite Gippy Grewal & many more, the actress has never shied away from expressing her desire to work with Rajkumar Hirani
In a recent event in the city, the two caught up & spoke length about cinema & their future projects. Navneet better known as a perfectionist, impressed the film maker with her vision and understanding of cinema.
"I have always been a fan of his work. He is a beacon of hope in an ocean of posers. Working with him will be an absolute honor" says Navneet Kaur Dhillon
Navneet will be seen in Amavas alongside Nargis Fakhri & Sachin Joshi & a punjabi film.