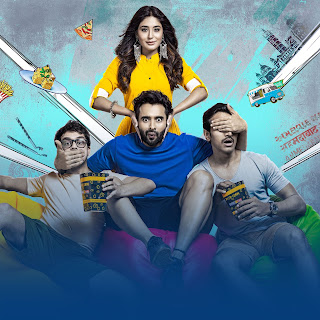 Sony Music today released the full album for Mitron, the much awaited film Produced by Vikram Malhotra, presented by Abundantia Entertainment and directed by the National Award Winning Director of Filmistaan fame – Nitin Kakkar.
The music of the film has been loved by fans and now with the album dropping, listeners can enjoy the entire album. This multi composer album with songs composed by some of the biggest music composers/producers in Bollywood namely YO YO Honey Singh, Tanishk Bagchi, DJ Chetas, Sharib-Toshi and Sameeruddin consists of 7 songs giving out the incredible flavour of the film which is a mix of fun , comedy, party with an emotional ride.
The first single released “This Party is over now” was by none other than Yo Yo Honey Singh which is yet topping YouTube charts. The second single was a beautiful love song “Sawarne Lage” which has won over the hearts of the youth. The two Gujarati folk inspired songs have been sung by the new Bollywood singing sensation Darshan Raval and is touted to be the biggest Navratri songs of all times.
To listen to the album, check out the album here:-  https://wynk.onelink.me/3330602766/a135855b
Set in the backdrop of the Gujarati milieu, the film is much anticipated and releases across theatres on September 14th
Privileged/Confidential Information may be contained in this message. If you are not the addressee indicated in this message (or responsible for delivery of the message to such person), you may not copy or deliver this message to anyone. In such case, you should destroy this message and kindly notify the sender by reply email. Please advise immediately if you or your employer does not consent to email or messages of this kind. Opinions, conclusions and other information in this message that do not relate to the official business of the sender's company shall be understood as neither given nor endorsed by it. Hill+Knowlton Strategies is a unit of Hindustan Thompson Associates Private Limited having the registered office at Peninsula Chambers, G. K. Marg, Lower Parel, Mumbai 400 013, India with Corporate Identification No. U99999MH1938PTC002771 (Operational Head Office at DLF Cyber City, Floor No. 2, Tower 9B, Phase III, Gurgaon 122 002, India).
Sony Music releases the ‘Mitron’ 7 track Album