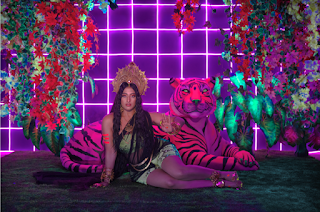 Check out the video HERE.

The colorful and empowering clip was created by an all-female team in collaboration with Kumari and Madhu. In speaking about the video, Kumari told The FADER:

“KARMA is a reminder that beautiful things come to life when strong women put their skills together. The video was done by an all-female team. It started as a collaboration between myself and Sam Madhu, which explores transitions from art to reality and remixes cultural elements from the past and the future. It is inspired by traditional Indian aesthetics and futuristic cyberpunk worlds.

Sam basically developed the idea of a neon universe in which I’m the central character, where traditional Indian elements like Rakshasa masks, goddesses and tigers are reborn with contemporary, neon aesthetics to create a universe where I appear as an array of compelling, powerful female characters. So you’ll see a latex matrix-inspired Rakshasi, a neon devi with her shocking pink tiger, a futuristic laser goddess. The video was so fun to make, and I feel like it represent a real female-empowerment moment. “

The song itself is produced by Sean Garrett and packs a passionate and powerful punch locked and loaded with robust rhymes and fierce delivery over a throwback beat with international resonances, which Idolator says finds the artist “coming into her own.”

BLOODLINE was released this February on Epic Records and can be streamed on all DSPs HERE.  The 5-track project also boasts the acclaimed single “SHOOK.” TIME Magazine commending it as a song that “drips with blustering self-assuredness,” and its Gil Green (Drake, Kanye West)-directed music video has amassed 5.5 million-plus views. Along with Sean Garrett, the EP also includes production work from Danja.

Currently, Kumari is a judge on the MTV India show Hustle, mentoring the next generation of artists in a rap battle competition show. It was the highest rated premiere in the network’s history. After completing her own headlining North American tour, she recently performed alongside Wiz Khalifa in New Delhi and was the first Indian artist to perform at the F1 Festival in Singapore. Look out for more new music from the budding superstar, coming soon.

About Raja Kumari
Indian-American rapper, singer, songwriter, actress and dancer Raja Kumari is a force of nature. A fearless, charismatic personality and natural-born storyteller, her mission is to create art that blends her Indian roots with her American upbringing. Her music is a sonic bridge between East and West that fuses the rhythms she absorbed as a trained classical Indian dancer with her love for hip-hop.

Kumari made her initial impact on global pop music as a sought-after songwriter. The creative force behind hits like Fall Out Boy’s multiplatinum smash “Centuries,” Iggy Azalea’s “Change Your Life” [feat. T.I.], Fifth Harmony’s “Like Mariah” [feat. Tyga], music for the hit Fox show “Empire,” and numerous anthems for Gwen Stefani have earned her acclaim and accolades across the board. Notably, she received a  GRAMMY® nomination for her work with Azelea and a BMI Pop Award for her work with Fall Out Boy.

Emerging as a disruptive force in hip-hop in her own right, Kumari released her debut EP, The Come Up, in 2016. Her solo material has received acclaim and attention from the likes of Billboard, Paper Magazine, Idolator and Complex and has been featured overseas by the likes of Rolling Stone, Vogue, Cosmopolitan, Harper’s Bazaar and GQ in India. Recently she performed on the Red Bull Tour Bus tour which showcases breakthrough artists throughout India, and performed as a guest on Amazon Prime’s digital reality show “The Remix”. Sharing the stage with Academy Award-winning composer A. R. Rahman on tour last year at the SSE Arena Wembley, as well as at the 2017 IIFA Awards at MetLife Stadium, Raja continues to collaborate with other artists throughout the world and was recently featured on the international banger “Vamos”, which cracked over 10 million YouTube views in under one week.

Raja Kumari’s talents extend beyond the studio, having recently co-starred in the acclaimed movie Gully Boy. She also is the host and curator of her own Apple Music Beats 1 show, The New India, where she spotlights some of India’s brightest new talents.

Needless to say, as her star continues to rise, Raja Kumari is poised to be a global force in her own right.
GRAMMY® Award-nominated songwriter and rapper Raja Kumari