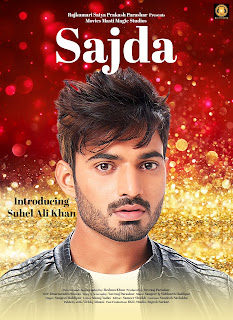 The song releases on 19th July, 2019
While the teaser poster of the song "Sajda" has already created a huge buzz, everyone seems to be curious about the mystery boy in the song. Who is the second boy? Is he a new face? The makers of the song present an all new face Suhel Ali Khan who will be seen in Sajda along side Yuvraaj Parashar, Tetiana Kharkevych (Film Airlift Fame) Having no Bollywood background and belonging to a normal middle class family, Suhel Ali Khan started his career as a on - location photographer in a renowned production house.   To his hardwork, he proved his profess & became the Production Controller & later an Executive Producer. Suhel has also marked his brilliance in Star Plus show Diya Aur Baati Hum.
YUVRAAJ PARASHAR'S NEW SONG "SAJDA" POSTER OUT; REVEALS THE MYSTERY BOY