Home Unlabelled Anurita is currently working on a film called Topaz. It's a film for zee5 for the web platform. This film is produced by BaniJ

Anurita is currently working on a film called Topaz. It's a film for zee5 for the web platform. This film is produced by BaniJ 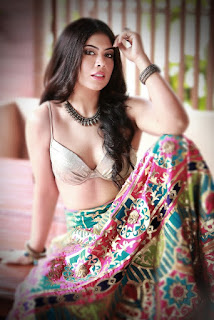 Anurita Jha is an Indian actor and professional model. She has been a model for many years now and has walked the ramps for major designers. She has taken part in many fashion shows across the country. Anurita made her debut with Anurag Kashyap' Gangs of Wasseyput and she also featured in the sequel Gangs of Wasseypur 2. And she sees no stopping ever since.
Anurita is currently working on a film called Topaz. It's a film for zee5 for the web platform. This film is produced by BaniJ. The second film that she has been working on is Pari and Pinnochio which has come on large short films. There are another couple of films and one of them is going to come out on Hamara movies and it will come out as a full-fledged feature film. We spoke to anurita and this is what she has to say, ", Talking about Topaz, It's a zee5 film. I had a very bold scene where I go backless. This is the first time I am doing something like this after many offers to do bold scenes. For me its very important that the director is good. I was really scared to do it. But I also wanted to do a different kind of look. So far I had done strong woman, emotional roles and a simple girl. This was something which was a little evil and bold. So for me, it was a challenge so I did it. Talking about Pari and pinnocho in large short films. They capture many issues that we go in today's world especially girls. When I was very young and I was modeling I had this problem where I used to eat and puke so that there is no food in my stomach and I look thin. It causes a lot of problems as we grow older and even I faced it. In this short film, they have shown bluehemia in a very nice way and captured it and shown how as a child you face certain issues of looking pretty and carry it for a very long time. So I definitely want to talk about this."
This surely seems to be a big year for anurita and we can't get more excited to see more of here
Anurita is currently working on a film called Topaz. It's a film for zee5 for the web platform. This film is produced by BaniJ