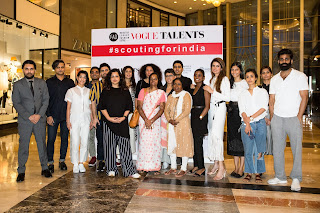 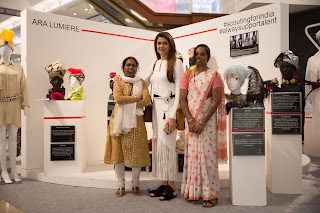 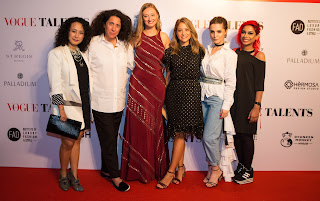 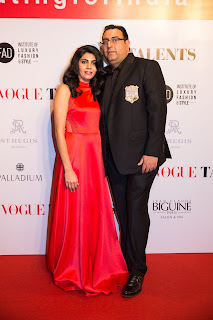 Scouting for India is the first edition of the latest Vogue Talents, the Vogue Italia platform, initiative in partnership with FAD Institute of Luxury Fashion & Style that was aimed at giving Indian Fashion a sustained global visibility on the global stage.
For the first time, a new generation of Indian designers comprising of Dhruv Kapoor, Ruchika Sachdeva (Bodice), Sidharth Sinha (NS GAIA) Nitin Kartikeya (Kartikeya India), Urvashi Kaur, Nimish Shah (Shift) Archana Rao, Bav Tailor, Shyma Shetty & Pranav Mishra (Huemn), Saaksha & Kinni and a special initiative by Hothur Foundation unveiling a collective designed by acid attack survivors was unveiled over a two day exhibit at the Palladium Mumbai as the official host to the event.
A jury comprising of Sara Sozzani Maino, Shivang Dhruva and Anaita Adajania Shroff selected  a winning designer to showcase the collection during Milan Fashion Week in September 2018. The winner was announced at FAD and Vogue Talents Gala Dinner hosted at The St Regis Mumbai which was attended by the India’s leading designers, industry insiders, celebrities, and socialites.
The winning designer brand was Huemn by designers Shyma Shetty & Pranav Kirti.
“The new generation of talents is our future and to support them is fundamental!” says Sara Sozzani Maino, Deputy Editor in Chief Vogue Italia & Head of Vogue Talents.
“ We have been investing into future of Indian fashion and we are delighted to have partnered with Vogue Talents ( Italy ) to unveil Scouting for India and support a new wave of Indian fashion talents. We have been working on the project for over two years and we are ecstatic to finally see it come to life” quote Shivang Dhruva, Founder & Director, FAD Institute of Luxury Fashion & Style.
The first edition, which was recently unveiled, also gave over 40 emerging Indian designers an opportunity to engage with Ms. Sara Sozzani Maino, Deputy Editor in Chief of Vogue Italia and Head of Vogue Talents for an exclusive mentoring at FAD Mumbai Campus followed by a feature in Vogue Talents issue.
On hosting this prestigious event, Mr. Rajendra Kalkar, President (West), The Phoenix Mills Limited said “The Scouting For India Project which is an initiative of Vogue Talents in collaboration with FAD, we are honored to be hosting this event for the upcoming Indian Designers who will be getting a global recognition in future. We wish all the very best to all the finalists and hope to see a fantastic show!”
FAD & VOGUE TALENTS (ITALY) UNVEIL SCOUTING FOR INDIA