AKSHAY KUMAR LENDS HIS SUPPORT TO #18to82 CAMPAIGN UNDER “NIINE MOVEMENT” 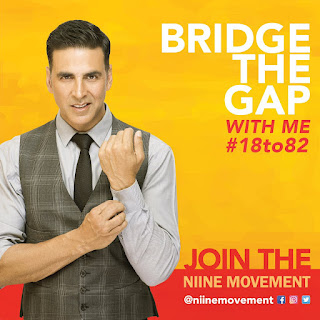 ·        Campaign Aims to Bridge the Gap Between Sanitary Napkin Users from 18% to 82%.
·        The Niine Movement is an ambitious new initiative aimed at raising awareness of menstrual hygiene and tackling the age-old stigma against menstruation across both genders and all age groups.
New Delhi, May 10, 2018:  One of Bollywood’s most iconic megastar’s and India’s very own ‘Pad Man’ Akshay Kumar is supporting a nationwide campaign - #18to82 – with the aim of bridging the gap between the 18% of menstruating females in India who use sanitary napkins, and the 82% predominantly engaging in unhygienic practices. The pioneering campaign launches ahead of the inauguration of the Niine Movement, an ambitious new initiative aimed at raising awareness of menstrual hygiene and tackling the age-old stigma against menstruation across both genders and all age groups.
Akshay Kumar is a renowned woman empowerment advocate and boldly tackled the issue of the menstrual taboo in the award-winning film Pad Man. He supports the Niine Movement as a continued champion of the cause of menstrual hygiene. Akshay Kumar took to social media to launch the #18to82 campaign with the message:
ONLY 18% of Indian women use sanitary napkins vs 82% who use unhygienic means.
I support the #NIINEMovement which breaks the taboos & encourages conversations on periods.
Help bridge the gap from #18to82, register on  www.niine.com
Speaking about his support for the Niine Movement, Akshay Kumar said: "Open and unafraid conversations on menstruation are powerful as they help to breakdown taboos. I am honoured to support the Niine Movement with the launch of the #18to82 campaign, because menstrual hygiene is an urgent issue that we must resolve in India.
Together we can ensure that every female has the right to manage her period safely and with dignity, and the Niine Movement can drive the social revolution that India needs to initiate change for an entire country.  The empowerment of women is the empowerment of a nation."
Despite India housing 355 million menstruating women, the second highest menstruating population globally, approximately only 18% of them currently use sanitary napkins - with the other 82% of women often reverting to unhygienic and unsafe alternatives such as old cloths, rags, hay and even ash. The key stimulus behind this staggering statistic can be traced back to decades of archaic attitudes and stigmas surrounding menstruation and the lack of accessibility for safe and affordable sanitary products. A result of the unwillingness to discuss female menstruation is the subsequent culture of silence and shame which has left women with no choice but to partake in unsafe menstrual practices behind closed doors - frequently resulting in urinary and reproductive tract infections, stress, anxiety, and even gender-based violence.
The Niine Movement is conceived by social entrepreneur Amar Tulsiyan. Speaking about the launch of the movement Amar Tulsiyan said: “We each have a responsibility to do what we can to tackle the taboos around menstruation and educate the next generation about periods in the right way. It is my hope that through the #18to82 campaign the Niine Movement becomes the spark that leads the way in bringing menstrual hygiene and dignity to every woman and girl in India.”
An ambitious five-year plan committed to grass-root change, the Niine Movement will be launched at the Menstrual Awareness Conclave taking place in Delhi on Menstrual Hygiene Awareness Day on 28th May 2018. The Menstrual Awareness Conclave will convene renowned film personalities, academics, policymakers, government officials, activists, business stalwarts, NGOs, thought-leaders, including Akshay Kumar, to discuss the impact that stigma and taboos on menstruation have had on holding girls and women back for centuries.
Join and follow the Nine Movement’s #18to82 campaign following and liking the campaign on @NiineMovement on twitter, facebook and instagram
About the “Niine Movement”:
The Niine Movement is an ambitious 5-year plan that aims to tackle the taboos associated with menstruation by engaging all genders and ages to step forward and join hands to promote the importance of menstrual hygiene awareness.
Understanding the need for collective effort to change mindsets, the Niine Movement intends to use its convening power to engage multi-sector groups in India -from governments, corporates and the NGO community - to sustain not only a discussion but encourage affirmative action on addressing menstrual hygiene management. To achieve its vision, the Niine Movement’s theory of change adopts a three-pronged approach by:
·     Educating girls, women, boys and men of good menstrual hygiene practices.
·     Enrolling citizens and existing menstrual hygiene product users in a supportive, taboo free environment to create an open forum for discussion and deliberation.
·     Enhancing the sanitation sector of India by providing the best quality menstrual hygiene products at appropriate prices.
Reflecting its vision for a new and better Swachh Bharat, which begins and is driven by girls and woman, Niine also reflects nine core ways a nation can achieve its full potential if we support menstruating girls and women, using the achievement of the Sustainable Development Goals (SDG), the 17 goals that world leaders agreed to achieving by 2030 to end world poverty, tackle climate change and reduce inequalities, as an index.
For further information please visit:
Website:          www.niine.com
Facebook:      @niinemovement
Twitter:             @niinemovement
YouTube:         Niine Movement
Instagram:       @niinemovement
AKSHAY KUMAR LENDS HIS SUPPORT TO #18to82 CAMPAIGN UNDER “NIINE MOVEMENT”