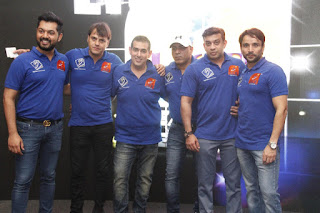 Every team had to battle it out with each other to get their best players in the alloted virtual points given by The UCB COMMITEE
the proud owners of UCB
AKBAR KHAN
WAHAB BARUDGAR
KARAN TANDON
WASIB PESHIMAM
VASSIM SHEIKH
The 3rd season of United cricket bash kick starts from 10th of April at Om Astro Turf Juhu with its final to be held on 14th May 2018.
There are 16 Teams owned by some of the Top Corporates, competing for the Cup
. Each team has a 18 members squad
and matches will be played in the evenings on weekdays
Organized by Ball Park Entertainment
Karan tandon
Wahab barudgar
Akbar khan
Mustaqeem sheikh
It’s last edition had Jonty Rhodes kickstarting the league
This year we have Bollywood celebrity Saqib Saleem being the face of the league
Ucb is powered by Rise and raise foundation
and Co-sponsored by san disc, ooh partners are bright advertising and in and out adverising
Entertainment were ecstatic with the interest displayed by the owners of 16 teams which are taking part in the tournament. "I am baffled with the meticulous planning with regards to the game of Cricket among the team owners. Each of them were fully prepared and had chalked out perfectly planned strategies as regards to the pros and cons of each player while bidding," exclaimed Karan Tandon.
“Our intention is to get cricket enthusiasts together to play competitive cricket .We want to provide cricket enthusiasts a platform at the highest level. All players are sportsmen who want to play competitive cricket. all the matches will be held at On astro turf at Juhu
and with the stupendous response meted out to our 2 previous seasons we have our digital partners 7 Star digital for live telecast of matches. The Media and Public Relations of UCB-3 are handled by Naghma Khan of SHAAZ Media Entertainment.”